Last year just weeks after school started John, an 8th grade student in an Aurora public school was not adjusting well. He was struggling to stay on task and pay attention to his teacher, to his assignments and he was simply not fitting in with his peers. His teacher referred John to a social worker who works with the students and families at the school to create the best possible learning experience for her students. The social worker was also tasked with having an Intern assigned to help her and to learn first-hand how to best help students who are struggling. The intern is not paid and is a part of the Communities In Schools Intern Program.

Our intern program started in 2000 with the first group of interns being placed in Aurora schools during the 2000-2001 school year stated Denise Elsbree, Director of Daytime Services and the intern program for Communities In Schools of Aurora. Elsbree went on to state that the mission of CIS – Communities In Schools is to surround students with a community of support, empowering them to stay in school and achieve in life. This coupled with a doctrine called the “Five Basics” is our driving force behind what we do for students throughout the school day advocating that every student deserves 1) A one-on-one relationship with a caring adult, 2) A safe place to learn and grow; 3) A healthy start and a healthy future; 4) A marketable skill to use upon graduation; and 5) A chance to give back to peers and community. “Our interns are instrumental particularly in helping us create those positive one-on-one relationships for students,” Elsbree said highlighting that during the 2013-2014 academic year, CIS interns provided 1100 service hours with Aurora area students. 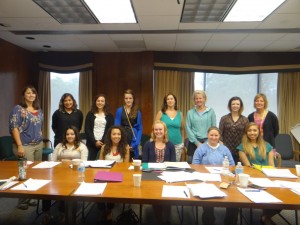 “Our mission and our five basics shape who we are and what we deliver to our Aurora students each day” stated Theresa Shoemaker, Executive Director of Communities in Schools of Aurora. Shoemaker added that “We are in our 20th year as a partner non-profit organization working with the four school districts of Aurora, the City and many partner agencies to collaborate and make the most positive impact we can make with the resources at hand.” Our connectivity and partnerships with local colleges and universities helps to create a win-win situation for Aurora students when it comes to our intern program and success with student achievement stated Shoemaker.

The CIS Intern Program helped over 100 student social workers, since program inception, to fulfill their dream as they worked closely with trained professionals in the field where student struggles exist.    Each year there is a rigid and very thorough screening process that many applicants go through to become a CIS intern. Unfortunately we cannot take every candidate who applies for the position and we do have a thorough process stated Elsbree. There are only about 10 slots that we look to fill each year with candidates coming from the BSW (Bachelors of Social Work) and MSW (Masters of Social Work) programs from Aurora University, the University of Illinois at Chicago, and Western Illinois University.

On the university side of the social worker training program is Alison Arendt, MSW, LCSW (Masters of Social Work and Licensed Clinical Social Worker, respectively). Arendt knows the inner workings of the intern program at CIS because she is a past employee of this organization and is now on the Aurora University staff as an Assistant Professor and the BSW Program Chair. This relationship connects Arendt directly with CIS and is helpful to her and to her students because she knows firsthand what CIS is looking for in the intern candidates. Arendt stated that CIS already has a healthy relationship with the schools in Aurora and the interns connect well with the students to enhance the already strong relationships.

Arendt explained that Aurora University currently has approximately 200 students in its BSW program and approximately 300 students in its MSW program. She further stated that she does not select students for the CIS Intern Program. It is up to each student to select which agency they are interested in to become an intern and it is solely up to the student to apply and go through the process laid out by the agency. Arendt also stated that in the spring the MSW students can nominate an agency or leader who best exemplifies the virtues of being a top service provider or leader. She said that CIS – Communities In Schools of Aurora has been a recipient of the “Agency of the Year Award” for the 2009-2010 academic year. In addition to winning the agency award two individual CIS employees were honored with the “Harold F. Schrage” Award for exemplary service to the field of social work. The first CIS award recipient was Denise Elsbree MSW, LCSW Director of Daytime Services for the 2005-2006 academic year. The second, and most recent winner in the 25th anniversary year (2013-2014 academic year) was Joanna VanLear MSW, LSW – CIS Service Manager. “I am very proud of the work being carried out by Denise, Joanna and all of our Daytime Services staff and interns” stated Shoemaker, Executive Director of CIS. “Students in Aurora schools deserve the very best that we can deliver to help them remove barriers to be successful, this is who we are, and this is the legacy that we want to deliver”.

Communities In Schools of Aurora is a registered 501 (c) 3 nonprofit agency working with all four school districts in Aurora, IL to do whatever it takes to keep kids in school and to become successful citizens of the community. www.cisaurora.org